There is a special concessional price charged for death advertisement in Eenadu Hyderabad newspaper. You need to give the death ad in fixed size to get the concessional rate. Following are the details:

To book Obituary Ad in Eenadu newspaper for any of the above editions, please send us your advertisement requirement via email to response@bhavesads.com. We would analyse your requirement and calculate the cost then send you a quote with discounted price. 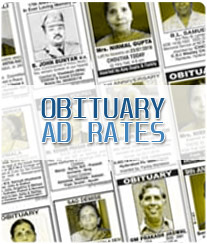 Check out current applicable Obituary Ad Rates of Eenadu from the table for various editions of Eenadu Newspaper. The rates mentioned are in Rupees for 1 square centimeter. There is difference in rates if you wish to place your ad on Front Page, Page 3 or Inner Page Position for Obituary Ad in Eenadu.

You can also download Eenadu Advertisement Rate Card which is available in Pdf & Excel format. We offer Special Discount for Obituary Ad on the above Tariff Rates. Get a Free Quote for Obituary advertisement in Obituary Newspaper. Send your requirement to response@bhavesads.com.

Get a Quote for Obituary Ad in Eenadu Newspaper

Obituary Ad Booking Essentials: Here's all you need to know

All Days, Every week.

Once the Ad is confirmed for release, you will receive a notification and you can check your ad phyically or via e-paper on the schedule date.

Book Obituary Classified Ads Online in Eenadu newspaper for all Kerala and other editions. Communicate your message to people through advertising in the Eenadu Classified Column. Book Obituary Ad Online in Eenadu newspaper and get spread the message about loosing your loved once. There is a special rate offered by the newspaper. Eenadu is the number one Telugu daily newspaper in the state of Andhra Pradesh and Telangana.

Eenadu Classifieds are popular in Hyderabad, Vijayawada, Vizag, Guntur, Rajamundary, Karimnagar and other districts of Andhra Pradesh and Telangana. The deadline to book classified in Eenadu is 2 day prior. You get more response on Saturday and Sunday Classifieds feature in Eenadu

Here is how you can book Obituary Ad in Eenadu: