Check out The Hindu Metro Plus Ad Rates 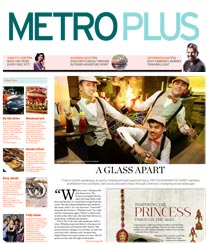 Check out Latest Metro Plus Ad Rates of The Hindu Newspaper from the below tariff table. The rates mentioned are in Rupees per square centimeter. This Table for The Hindu Metro Plus Ad Rates provides you cost for Front Page, Back Page, Page 3, Page 5 and Inner Page Position for its various Editions.

You can also download The Hindu Advertisement Rate Card which is available in Pdf & Excel format. You can avail Special Offers & Discounts on this Tariff Rates. To get an Free Quote for Metro Plus advertising please email your requirement to response@bhavesads.com.

Get a Quote for Metro Plus Ad in The Hindu Newspaper

Metro Plus a supplement of The Hindu which publishes on Weekdays and gets circulated along with the Main edition of the newspaper. Metro Plus is a city centric feature which covers local events and articles published on article on life style, health, fitness and Page 3 events.
Metro Plus publishes along with several editions of The Hindu Newspaper which includes all the major cities of South India like Chennai, Coimbatore, Madurai, Hyderabad, Bangalore, Mangalore, Mysore, Trivandrum, Vizag, Vijayawada, Trichy and Delhi.
Advertising in The Hindu Metro Plus is ideal for Retail, Hotel, Restaurants, Exhibitions, Pubs, Boutiques and other businesses who are looking to target elite and upper middle class segment. The Advertisement Rates of Metro Plus are nominal as compared to the Main Edition. There are various advertising packages offered in The Metro Plus.

Here is how you can book Metro Plus Ad in The Hindu:

Ad Rates for Other Advertising Categories in The Hindu