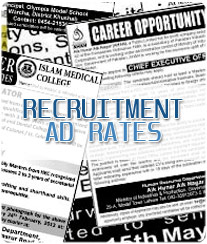 Don't forget to check the booking essentials to know about the jobs advertisement publishing date, booking deadline and other mechanical details of Sakal Kolhapur Newspaper which helps you to plan your schedule according. You can give Full Page, Half Page, Quarter Page or any other size advertisement for Front Page, Back Page, Page 3 or in inner page of Sakal Kolhapur newspaper.

Get a Quote for Ad in Sakal Newspaper

There is a feature on Recruitment published by Sakal for its Kolhapur edition called Jobs. Sakal Jobs covers articles on Company trends through which job seekers can update themselves to face the interview. There are also Recruitment tips for Job providers and Job seekers published in Jobs Kolhapur feature. The advertisement posted in Jobs supplement are of Situation Vacant, Walk-in interviews, Job Opportunities, Overseas Appointments, Government Jobs etc. Job seekers eagerly waits for the newspaper to read advertisement published in Sakal Kolhapur by recruiters.
There is a special tariff designed for Recruitment Advertisement in Jobs by Sakal. The ad rates are defined for Kolhapur and there is a special package rates if the advertisers goes for all editions.

Book Sakal Classified Ads Online in Kolhapur Marathi edition of the newspaper for Recruitment Advertisements. Reach to job seekers for vacancies in your organization through advertising in the Sakal Classified Column. Book Recruitment Ad Online in Sakal newspaper and get better response. Appointment Classified Advertisement in Sakal Kolhapur are mostly published by companies and organization who wish to recruit manpower.

Sakal Classifieds are popular in Pune, Kolhapur, Aurangabad, Mumbai, Nashik,and other districts of Maharashtra. The deadline to book classified in Sakal is 2 day prior. You get more response on Saturday and Sunday Classifieds feature in Sakal

How to book jobs Ad in Sakal Kolhapur Newspaper?

We are Advertising Agency in Kolhapur. We help you post jobs Ad in Sakal Newspaper at Lowest rates.

We are a national Advertising Agency and our clients are based all over India. Therefore we do bulk media buying from Sakal newspaper for jobs advertisement so that we can offer our clients the lowest rates even for small budget releases. We have effectively presented this information on our digital platform by which anybody can understand jobs advertisement rate card easily. This has become a great tool for advertisers to plan media in an effective manner while saving cost on advertising in Sakal to get best the milage on spendings for Kolhapur city.