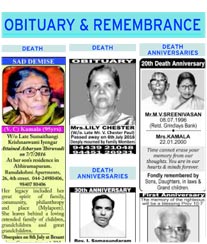 Don't forget to check the booking essentials to know about the Obituary advertisement publishing date, booking deadline and other mechanical details of The Hindu Madurai Newspaper which helps you to plan your schedule according. You can give Full Page, Half Page, Quarter Page or any other size advertisement for Front Page, Back Page, Page 3 or in inner page of The Hindu Madurai newspaper.

To book Obituary Ad in The Hindu newspaper for any of the above Editions, please send us the Ad Content along with Photograph of the person deceased. We would swiftly send you the Ad Design and also offer you discount on the above price. Email to response@bhavesads.com.

How to book Obituary Ad in The Hindu Madurai Newspaper?

We are Advertising Agency in Madurai. We help you post Obituary Ad in The Hindu Newspaper at Lowest rates.

We are a national Advertising Agency and our clients are based all over India. Therefore we do bulk media buying from The Hindu newspaper for Obituary advertisement so that we can offer our clients the lowest rates even for small budget releases. We have effectively presented this information on our digital platform by which anybody can understand Obituary advertisement rate card easily. This has become a great tool for advertisers to plan media in an effective manner while saving cost on advertising in The Hindu to get best the milage on spendings for Madurai city.