Book City Tribune Ad in The Tribune at Lowest Rates 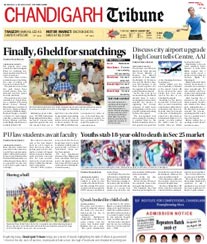 Get a Quote for City Tribune Ad in The Tribune Newspaper

Tribune publishes City specific supplement along with its main edition everyday. Chandigarh Tribune get circulated in Chandigarh city, Ludhiana Tribune in Ludhiana city, Amritsar Tribune in Amritsar City, Bathinda Tribune in Bathinda city, Jalandhar Tribune in Jalandhar city of Punjab. It covers lifestyle and entertainment space in newspaper with a daily dose of Bollywood, Hollywood, Fashion, Relationship, City and Campus.
Advertising in Chandigarh Tribune is ideal for Retail, Hotel, Restaurants, Exhibitions, Pubs, Boutiques and other businesses who are looking to target elite and upper middle class segment. The Advertisement Rates of City Tribune are cost effective as compared to the Main Edition. There are various advertising packages offered by Tribune for its City supplement in Chandigarh, Ludhiana, Amritsar, Bathinda and Jalandhar.

Tribune Classifieds are popular in Chandigarh, Ludhiana, Jalandhar, Delhi and other districts of Punjab, Haryana, Jammu and Kashmir, Himachal Pradesh & Chandigarh, . The deadline to book classified in Tribune is 2 day prior. You get more response on Saturday and Sunday Classifieds feature in Tribune

Here is how you can book City Tribune Ad in The Tribune:

View The Tribune Ad Rates for: