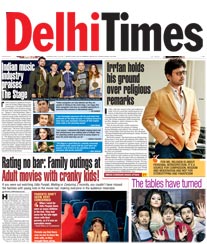 You can also download Times of India Advertisement Rate Card which is available in Pdf & Excel format. You can avail Special Offers & Discounts on this Tariff Rates. To get an Free Quote for City Times advertising please email your requirement to response@bhavesads.com.

Publishing Days All Days, Every week.

Book your Ad in City Times atleast 3 days prior to the release date.

Your Creative has to be received 3 days in advance

Track your Campaign Once the Ad is confirmed for release, you will receive a notification and you can check your ad phyically or via e-paper on the schedule date.

Your ad would publish on any Inner Page

City Times an entertainment and Lifestyle supplement published by TOI which comes out daily with the main edition in every City. A supplement which is filled with fun, frolic, and entertainment. City Times is one of the strongest driver of readership, the daily entertainment supplement enjoys almost universal salience and readership.
City Times covers lifestyle and entertainment space in newspaper with a daily dose of Bollywood, Hollywood, Fashion and Relationship.
Advertising in City Times is ideal for Retail, Hotel, Restaurants, Exhibitions, Pubs, Boutiques and other businesses who are looking to target elite and upper middle class segment through Times of India Newspaper. The Advertisement Rates of City Times are cost effective as compared to the Main Edition.

Here is how you can book City Times Ad in Times of India:

Ad Rates for Other Advertising Categories in Times of India